Twitter app users can now Go Live without Periscope. When composing a Tweet on iOS or Android, users can add a live video stream to their timeline by tapping the live video icon. Until now, users wishing to save these live tweets would have to open them in Periscope in order to capture them using Snagscope, but the latest release of Snagscope now accepts Twitter Live links too.

One way to save a live Twitter broadcast is to copy the Tweet link and paste it into Snagscope to start the recording, but an even simpler approach is to use the “Share via…” option.

Snagscope will start recording. If you would like to capture other tweets, you can repeat this process. Snagscope can handle multiple recordings at the same time.

If you want to monitor the capture process, you can launch Snagscope by selecting it from the notification/status bar. When the recording completes, its status will show as DONE. Select the recording and click “Save to File”. 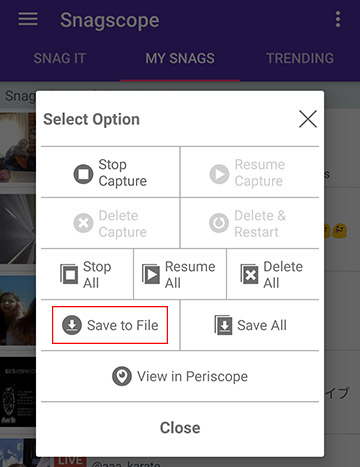 This will merge all the capture segments into a single MP4 file, and save it to the Downloads directory by default. Use an app like FX File Explorer to navigate to Downloads and view the saved file.

Snagscope also has the ability to detect Periscope URLs on the clipboard. If Snagscope is running and you have enabled clipboard monitoring, then copying a Periscope link will initiate its capture. This now applies to Twitter Live links as well. By enabling clipboard monitoring, you can save a step and simply click “Copy link to Tweet” from the tweet menu to begin a capture.

You can enable clipboard monitoring in app settings:

Here is a video demonstration of how you can use Snagscope to save Twitter Live videos:

View all posts by iqtecture